Welcome to this weeks Science of Soul , On this show I will be featuring the great new album from Durand Jones & The Indications "Morning In America" , I highly recommend you check it out . Other new releases this week come from Teddy B and i will dip into Willie Clayton's new album "Excellence" . Had some great news this week, Detroit soulman Big L is currently in the studio with master engineer Carlos Gunn at Masterpiece Sound Studio in the motorcity and under the guidance of my good friend Marlin McNicholls If his debut release of last year is an indication of whats to come I cant wait . Listen out for a great steppers track from one of the real nice guys in the music bizz Dre T Turner originally out of California but currently Chi Town based "Stepping Between The Sheets" is a real gem. Ok It's music time sit back enjoy and please share with a friend..

Hour Two
Con Funk Shun - Promise You Love
Dazz Band - Knock Knock
Sammy Jones - You've Got To Show Me
Shirley Murdock - The One I Need
Bigg Robb - Macaroni & Cheese
Special - Put Your Hands On Me
Vick Allen - Thankful For My Woman On The Side
Ronnie Dyson - I Think I'll Tell Her
Big L - If I Knew Then
Durand Jones & The Indications - Court Of Love
Jonathan Winstead - Wake Up
The Temptations - Hoops Of Fire
Posted by Mickey Nold No comments:

Email ThisBlogThis!Share to TwitterShare to FacebookShare to Pinterest
Labels: Durand Jones & The Indications 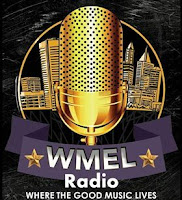 I start this week with some good news, Lamont "Showboat" Robinson has confirmed this years Inductees for the R&B Hall of Fame, that's to be held at the Charles Wright Museum in Detroit on June 23rd. If you can make it don't miss it! It's always a great event.
I would just like to say a big thanks for all the great feedback from the tributes to Harvey Scales & Sydney Joe Qualls of previous weeks. I felt it was important that I celebrated the lives of these 'unsung gentlemen of soul'. 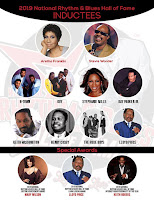 This week I have new music from Cardell Harrington, Sir Charles Jones, Avant and Chicago's rising star Michael Donaby who's new single will be available from March 22nd. also I'll be album tracking from the new sets by Rockie Robbins, Randy Hall and the French soulman Wary, plus the forthcoming release from Rahsaan Pattersons new album due to be issued in May, called "Heroes & God's," if the lead track "Sent From Heaven" is an indication of whats to come it's gonna be a great album. For the old Skool folks there is a great track from Maurice Jackson in the mix but please excuse the the crackles I just had to share it with you. Ok it's music time sit back relax and enjoy... 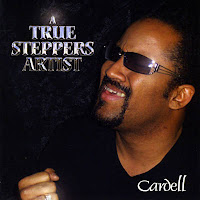 
Hour Two
Cameo - Why Have I Lost You 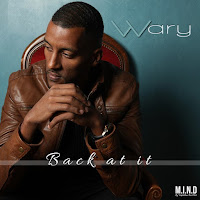 Al Parker & Cleveland Jones - No No No
Cory Wallace - Dreamin'
The Whispers - You Are The One
Wary - Grapes & Cherries
First Choice - I Love You More Than Before
Rockie Robbins - Love Me Tonight
Rahsaan Patterson - Sent From Heaven
Maurice Jackson - Don't Stop Saying That You Love Me
L V Johnson - How Can I Live Without You
Randy Brown - I Wanna Make Love To You
Joe Simon - Neither One Of Us
Posted by Mickey Nold No comments:

Email ThisBlogThis!Share to TwitterShare to FacebookShare to Pinterest
Labels: 17-03-2019

We unfortunately have more sad news this week on The Science of Soul involving another great singer, sadly Sydney Joe Qualls has passed away in Chicago. He may not be a household name but he was highly respected by his fellow artists and music lovers alike, so it's only fitting that I pay a musical tribute to celebrate his legacy. 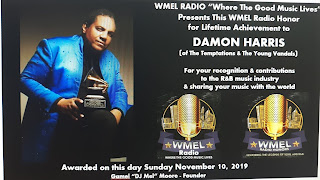 On a happier note it's been confirmed that Baltimore native, and former Temptation, Damon Harris will be receiving the WMEL life time achievement award posthumously and I am honoured to say I have been invited to present the award to Damon Harris Jr, The Ceremony will be in Baltimore, Maryland, later this year in November, more details will follow over the next few months.

Musically this week I have new releases from UK soulman Laville, and it's great to get new product from Wendell B, namely "Beautiful", it's  track from his forthcoming album that's due a little later in the year. Other new released music comes from Darryl Perry and I'll be dipping into current albums from The Undisputed Truth, Marc Staggers and Bobby Helmz. I have not forgotten the Old Skool folks, so there is plenty to bring back those memories of yesteryear. So Sit back and enjoy.

Alternative player installed today, if it doesn't work in your country please message us (bottom of page) Sorry also all earlier players are no longer working. 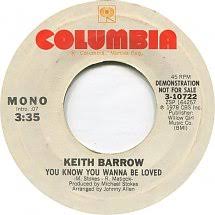 Chuck Cissel - Understanding Man
Odia Coates - Make It Up To Me Baby
Darryl Perry - Inside Of Your Love
Prince Philip Mitchell - Make It Good
Impact - Taboo
Esther Phillips - S.O.S
Major Harris - Loving You Is Mellow
Keith Floyd - Just Kickin' It
Wendell B - Beautiful
Keith Barrow - You Know You Want To Be Loved
Tyrone Davis - Be With Me
The Manhattans - I Wanta' Thank You 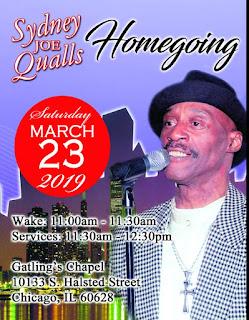 Sidney Joe Qualls was a Southern-born soul singer who was heavily influenced by Al Green. Although his sound did capitalise on the success of the Reverend, he did have a quality that was all of his own. He released a couple of LP’s that are heavily sought after gems, one released at the back end of the 70s on 20th Century featuring ‘I don’t do this’. This is his debut on Dakar Records which bathes unashamedly in all that is so rich about the early 70s sound. A classic.

Research indicates that Mr Sidney Joe Qualls (often spelt Sydney) was raised in the small town of Jacknash in Arkansas where he turned professional after leaving high school with a voice enriched by the joys of testifying to the Lord. In itself, this would appear to be a relatively traditional education for most soul greats. But it is the small town of Jacknash that is so curious. For this has been cited as the birthplace of the Reverend Al Green, although most biographies reference Forrest City. I have been unable to confirm if Jacknash is a small satellite town of Forrest City, but if Misters Qualls and Green did grow up within throwing distance of one another, that would be quite significant. For Sidney’s primary influence is undeniably the great Al Green. Indeed, after his meeting with Otis Leavill prior to moving to Chicago and signing for Dakar Records, Otis believed he had welcomed the ‘new Al Green’ to the fold.

Originally set up by Carl Davis while still under contract to Brunswick Records, Dakar was coming to the end of its near decade of soul decadence. However, Carl still had a lot of spirit left in him which he duly graced this record with. Several singles were released from this delicious morsel : the tremendous “How can you say goodbye” – an awesome reminder of how Al Green could tear up those midtempo ditties with the utmost ease; the beautifully arranged, tunefully complex “Where the lilies grow”; and the vibrant “Run to me” – a thumping goodie from one of my favourites, Sam Dees. Interestingly, there is a heavy influence of Sam Dees in his singing approach, especially if you are familiar with Sam’s version. The influence is even more apparent on my favourite track of the platter, the crippling “I’m being held hostage”. One listen to this and you’ll willingly sell your house to fund the ransom. And again the Sam Dees are subtly present on my other favourite, “The next time I fall in love” - a huge hit with the rare groove circuit for all the reasons that make this genre those addictive.

His most powerful ‘Al Green’ performance is probably the sublime “Can’t get enough of your love”, complete with those bumping Hi Records skins and a creative girl chorus. There are a couple of tasty bluesy funk numbers in the title track and “Shut you mouth”, a very nice, light pop number in the shape of “Please help me”, and the sole ballad, a cover of “If you don’t know me by now” - which I feel only serves to highlight his weaknesses, and none of his strengths. As an album, this is an exceptionally fine tenderiser for the soul with too many high points to fit these pages. As an artist, I feel he had more to offer than being another Al Green clone that, when he hints at those Sam Dees inflections (also check out his glorious ‘I Don’t do this’ favourite), really captures a unique timbre that is something special indeed. - Delite radio
Posted by Mickey Nold No comments:

Sadly I have start this weeks Science of Soul with more bad news, southern soul lady Katrenia Jefferson sadly passed away on February 20th, and was laid to rest in Jackson, Mississippi, on March 2nd. Katrenia was a real deal soul lady and very highly respected by her fans and fellow artists alike. I have wonderful memories of long telephone conversations with Kat, and I must thank my soul sister Shai Simone for introducing us. If your not to familiar with her work be sure to check her out. I have included two of my favorite tracks today, be truly be missed on the Southern Soul Scene.
On a happier note, some great new music on this weeks show from Stan Mosley from his "Soul Resurrection " album, as it is now officially available and I have other new music from Lasperanza featuring Izzy Chase, Rennie Williams, Teddy B and Montrell featuring Andre' Lee. For the old school folks I have some real gems that will take you back in time, including Bobby Hutton, Sandra Feva, The Dramatics and Unified Tribe so sit back relax and enjoy ....

Hour Two
Down To Earth - Gimme' Tonight
Ronnie Williams - I Own It
Jamm - One & Only
Unified Tribe - Heartbeat
Teddy B - I'm Sorry
Elaine Stepter - Dim The Lights
Katrenia Jefferson - All The Good Men
Katrenia Jefferson - What If
Teena Marie & Ronnie McNeir - We Gotta Stop Meeting Like This
Lamont Fleming - Don't Make Me Promise
Leroy Hutson - Lonely Without You
The Dramatics - Best Thing In My Life
Posted by Mickey Nold No comments: