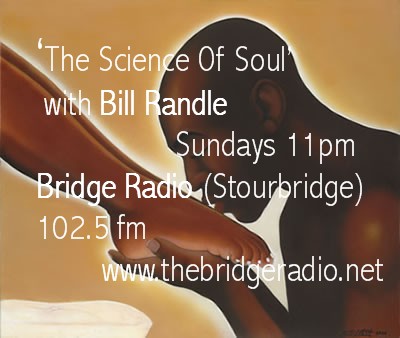 The anniversary of Bill's first show on 'The Bridge' later called 'Black Country Radio' was 19 years ago this week on 11th November 2012. The Blog page with track listing can be found here:-  https://science-of-soul.blogspot.com/2012/11/welcome-to-soul.html
Posted by Mickey Nold No comments:

Because this interview wasn't in Bill's sweet soul vain it didn't get re-uploaded to his Science Of Soul pages until today. It was originally broadcast on Mickey's Basement Soul Sunday show as a Special. As with all of Bill interviews they got an extra boost when used as auto pilot tapes on PCRL during the DJ free hours of the day when DTI was more likely to raid the station so nobody would do live shows. Re-uploaded here for Limu in France who showed interest in the late Terry's work. Thanks Bill for your time collecting Terry's memories and reminding him what wonderful work he'd done.